New High Performance Hydraulic Nuts (hydraulic nuts) were recently developed to meet the power market need for leak prevention, thus ensuring reliability when it is most needed and profitable. Installation is safer and considerably faster than traditional assembly methods that use impact tools, hydraulic torque wrenches and hydraulic stud tensioning.

The energy industry’s drive for improved productivity in recent years has driven the development of increasingly specialized components that are intended to achieve optimum performance at minimal operating cost. One unintended result of these increased operational demands is that conventional bolting technology may fail to live up to desired expectations on some specialized components. This paper will focus on one specific example that has broad industry implications for other specialized energy components.

Dominion Energy’s Surry Nuclear Power Plant in Virginia was experiencing two significant problems in the disassembly/assembly of their main governor valves. The time required to remove and re-install the 32 nuts on the valve heads seemed overly long. Of even greater concern were excessive delays and costs associated with replacing galled nuts and studs, and repairing consequent damage to stud holes.

After exploring various alternatives, Surry decided to test hydraulic nuts on the overhaul of two of its governor valves. Disassembly/assembly time was reduced from approximately one full shift per valve – to less than one hour. In addition, the avoidable cost of parts and the two shifts typically required to repair/replace gall damage was totally eliminated. Hydraulic nuts were subsequently utilized on additional Surry governor valves with similar dramatic reductions in time and costs.

This paper elaborates on the design, function and application of hydraulic nuts.

Hydraulic nuts are used in place of a standard nut that is tightened with an external tool, such as impact tools, torque wrench or hydraulic tensioner. The hydraulic nut is self-tightening – completely eliminating the need for conventional tools.

A hydraulic nut functions as the nut with its own built-in tightening mechanism. A hydraulic nut has a built-in hydraulic cylinder. Hydraulic pressure from an external source, such as a high- pressure hydraulic pump, pressurizes the cylinder to generate an axial load that simultaneously tensions the stud it is affixed to while compressing the flange and gasket assembly. The tension generated in the stud by the built-in hydraulic cylinder is maintained permanently by the hydraulic nut’s locking collar until such time the process is reversed. For general assembly details see Figure 1. 1.75” x 8UN Hydraulic Nut. 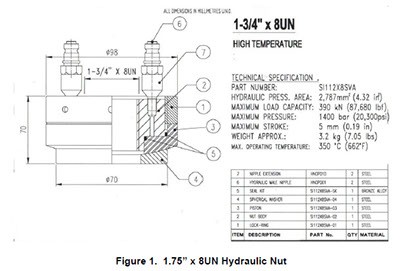 The installation sequence of the hydraulic nut is detailed below.

Step 1
To install a hydraulic nut, it is screwed onto the bolt until the base is hand tight against the working face of the flange. See Figure 2. Hydraulic Nut Assembly. 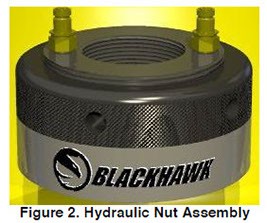 Step 2
Hydraulic pressure is then applied by a pump that is connected by a high pressure hose to the nipple fitting (Item 6, Figure 1.) on the top of the nut body into the sealed chamber. The hydraulic pressure forces the piston and nut body apart, thus stretching and tensioning the bolt through the flange joint. See Figure 3. Hydraulic Pressure Applied. 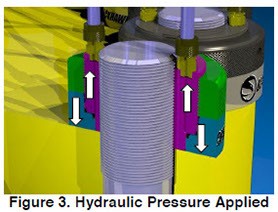 Step 3
The threaded locking collar mounted on the nut body is then screwed down and hand tightened with a small hand-held tommy bar to retain the induced tension in the stud. See Figure 4. Turning Locking Collar to Retain Load. The pressure is then simply released from the pump and the hydraulic hose removed from the nipple fitting to complete the operation. 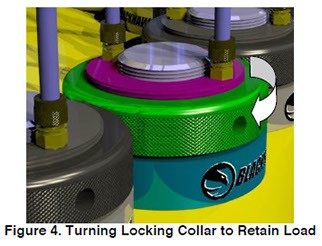 Multi-Stud Tensioning
Each stud in the flange is fitted with a hydraulic nut and tensioned simultaneously providing an extremely fast and accurate procedure for flange assembly. See Figure 5. Simultaneous Tightening of Hydraulic Nuts. 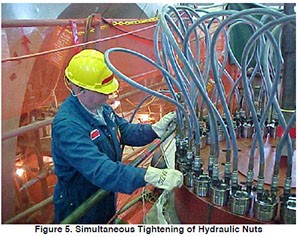 On critical flanges, control of the bolt preload is essential to the performance of the flange. Bolt load that is too low will not ensure suitable gasket stress is maintained to affect a seal. The result is leakage. A bolt load that is too high will result in damage to the flange, bolt or gasket, the result again being leakage (1).

In addition to overall bolt load being either too high or too low, most assembly techniques also result in a great deal of scatter of the bolt load from bolt to bolt around the flange (2). A wide error in bolt load is generally experienced using hand, impact tightening and torquing.

Torquing, a generally accepted industry method of flange make up, is negatively affected by cross-talk and friction. Cross-talk is a term used to refer to the elastic interaction between studs in the same flange. As one stud is tightened using torquing, the flange joint will compress, unloading the stress in previously torqued studs. The premise of torquing one stud at a time makes it almost impossible to provide uniform preload. In addition, the effect of friction between the mating surfaces of the threads and nut face causes error in achieving the correct bolt preload. On average, 90% of torquing effort is lost to friction. Friction in larger fasteners leads to galling and damage to threads. See Figure 6. Effect of Nut Friction. 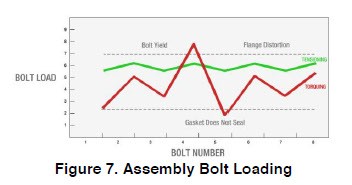 This error in bolt load control can lead to premature failure of the flange component.

The bolt load is simply achieved by applying hydraulic pressure across an accurately defined piston area. A simple preset pressure generated by the hydraulic pump achieves a powerful, accurate and known preload to each of the studs simultaneously. The technician’s hands are free while the studs in the flange are being simultaneously tightened. Hydraulic nuts eliminate the errors due to friction and cross-talk associated with torquing. They also eliminate the pinch points associated with torquing.

Bolt load accuracies of 95 percent are generally experienced with hydraulic nuts, which is far greater than that of torquing and even more accurate than tensioning. See Figure 8. Assembly Accuracy. 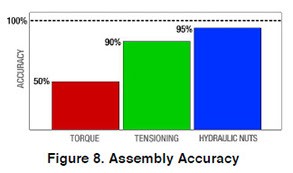 No major physical force, large wrenches or torque tools are required to correctly fit and remove nuts. The technician simply needs a small tommy bar held in the palm of the hand.

Hydraulic nuts have revolutionized the make up and disassembly of critical flanges. Some of their advantages are as follows:

Dominion Energy Surry Nuclear Plant focus on improving reliability on critical assets led to the review of the assembly and disassembly problems experienced with governor valves on Units 1 and 2.

Surry’s reliability-centered maintenance practice puts the governor valves on a 39-month inspection frequency. These inspections form part of the over speed analysis requested by the turbine vendor. On average, two valves are opened during each refueling outage.

Old Method of Assembly and Disassembly

Previous to the installation of hydraulic nuts, the governor valves were disassembled, first using slugging wrenches and hammers and then later using a hydraulic torque wrench. The time to disassemble one valve bonnet consisting of 32, 1.75” nuts was approximately one shift for two millwrights. Problems regularly resulted with each disassembly with the galling of several bonnet nuts and bonnet stud holes.

The bonnet studs would need to be cut to enable the removal of the valve. Removal of the bonnet studs would usually result in damage to the bolt holes. The holes were first re-tapped and if the threads were still damaged, a helicoil was installed or the bolt hole machined and threaded oversized to accommodate a step stud. Repaired holes were sometimes not perpendicular to the valve flange, contributing to difficulty in installing the valve bonnet.

On reassembly, hydraulic torquing methods were employed using two millwrights for one shift (8 to 12 hours) for each valve bonnet. A multi-pass (up to eight passes) method of torquing was used to bring the bonnet in parallel with the valve body. Gap measurements were taken to control the gap between the mating faces to within .002”. A final torque of 2200 ft-lbs. was applied.

The hydraulic nuts were designed to replace existing cap nuts and fit to the valve bonnet. Details of the governor valve hydraulic nuts are shown in Figure 1. 1.75” x 8UN Hydraulic Nut.

The nuts were assembled and tightened following the procedure outlined above in Hydraulic Nut Operation. The nuts were simultaneously tightened, bringing the bonnet down to the valve body uniformly. The highly accurate hydraulic nuts maintained the gap specification of .002”. After completion of the tensioning operation, an air line was connected to the nipple and the small volume of oil found in the hydraulic nut was blown out. The hydraulic nipples were removed, and replaced with plugs to prevent contamination from entering the nut. A final assembled view of the governor valve with the hydraulic nuts is shown in Figure 9. Final Assembly. 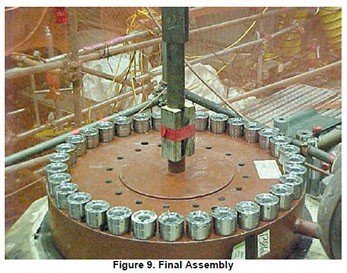 The first sets of nuts for two governor valves were installed in October 2000. One valve was disassembled in March 2002. The total disassembly time was also 30 to 45 minutes with no galling or other damage to the studs, nuts or bonnet stud holes. 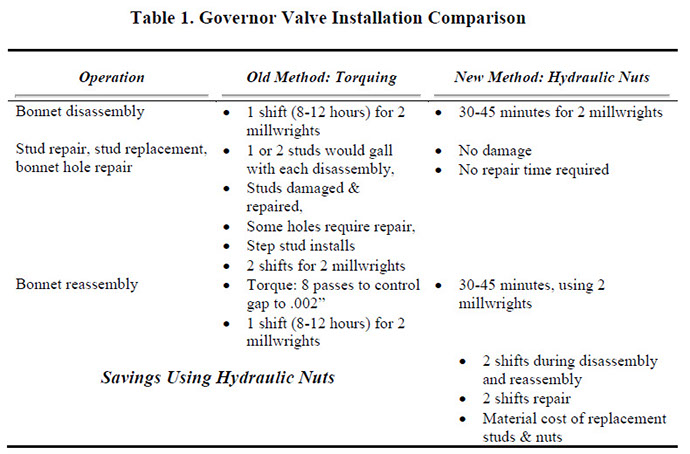 Nuts for one Reactor Coolant Pump have been ordered. These are scheduled for installation in the fall of 2003.

Other applications for Hydraulic Nuts are:

Hydraulic nuts are a major technological development in meeting the industry goal to seek out improvements in reliability and increase performance on critical assets. 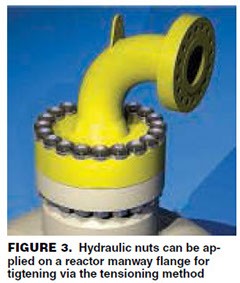 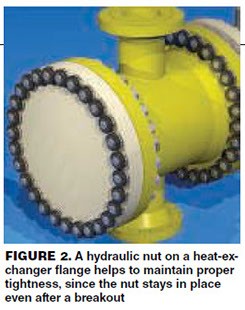 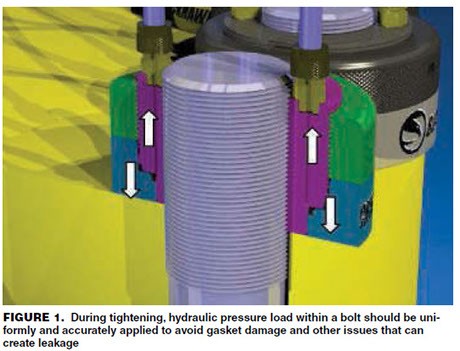