Previous Next
Avoiding the Galling Roadblock

Need a surefire way to speed-up breakouts, increase worker safety, and finish your turnaround on schedule and under budget?

Then you need to eliminate galling.

If you’ve ever run a breakout, you’ve dealt with galling. It’s an industry-wide problem that happens so often it’s scheduled into even your biggest turnarounds. On almost every break-out, studs will gall. Nuts will seize. Disassembly will screech to a halt, and you will have to decide how to handle one of the most common failures of a bolted joint assembly. Should you get a hot permit and risk torching off the nut, or should you use a nut-splitter, instead? Which option will cause you longer delays? Which option will require more manhours or equipment? Which option will get you back to discovery work faster, so that you can get on with the task at hand?

And do you really have to choose? Or should you avoid galling altogether? Believe it or not, it can be done.

Above : Cut nuts due to galling

But should you bother? After all, galling happens all the time. Sure, torching off studs or splitting nuts is inconvenient, but it’s just nuts and bolts. Right? Actually, no.  Galling is dangerous, and with multiple paths toward prevention, there’s no reason to continue taking that risk.

The Dangers of Galling

The methods required to breakout a galled stud are hazardous as well as time consuming. Torching off the stud brings the obvious risks of using a flame around hydrocarbons. Although this procedure is used frequently enough that many have become desensitized to the dangers, the potential for serious injury and even death remains.

And if you’d rather avoid using flames around hydrocarbons, your other option is to cut off the nut with a nut splitter. Using a nut splitter eliminates the hot work permit but not the risk. Every galled nut is holding together the potential energy of a compressed spring within the flange. Cutting off the nut releases all that energy at once, which runs the risk of creating a dangerous projectile or other safety issues.

Even when galled studs are removed without injury, they cause project creep. Every minute that you’re waiting for a hot work permit is a minute you can’t get to your discovery work. Every minute you’re working to split open that nut is another minute you must push back your breakout teams and equipment rentals. It’s another minute your turnaround might be delayed if you can’t get that flange open. And if studs gall on more than one flange? That schedule just gets tighter and tighter.

You can continue to do what you’ve always done and build in the wait time for the inevitable galled stud delay. You can even have your hot work permits ready to submit and your team ready to break out the torches or nut splitters and hope that no one gets hurt. You can hope that galling doesn’t significantly delay your discovery work, and if it does, you can hope that discovery work doesn’t turn up anything that will slow you down even more.

Or you can prevent galling altogether. Protect your workers. Stay within budget. Finish that turnaround on schedule, and get back to the work you’re there to do.

The best path to eliminate galling depends on factors specific to your bolted joint scenario and needs. INTEGRA offers a variety of methods that can help you prevent one of the biggest hassles in the industry.

For most bolted joints, bolt tensioning is the preferred method to eliminate galling. Bolt tensioning, which is a hands-free bolting method, applies load by using a tensioner to stretch half or all studs on the joint simultaneously before turning the nut by hand. This method not only achieves faster and more accurate bolt load, but it also eliminates galling by reversing the process during breakout. Because the stud is stretched before the nut is turned off, the nut is never turned under load, eliminating the conditions necessary for galling to occur.

When load accuracy is paramount but traditional bolt tensioners won’t fit, Blackhawk™ Hydraulic Nuts also provide the added benefit of eliminating galling. Similar to bolt tensioners, Blackhawk Hydraulic Nuts apply load by first stretching the stud and then hand-turning the nut. However, unlike traditional tensioners, Blackhawk Hydraulic Nuts hold the hydraulics within the nut itself, allowing them to fit in tighter configurations. Because they are also removed by stretching the stud first, the nut is turned under zero load, again eliminating the conditions necessary for galling to occur. 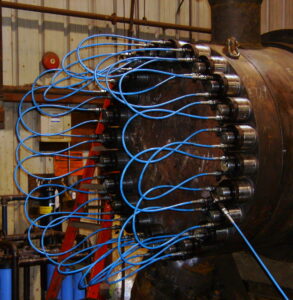 Above : BlackHawk™ Hydraulic Nuts on a flange

For situations in which tensioning is not possible, such as studs with short grip length, thin flanges which might bend under heavy loads, or short stud length on top of the nut where studs cannot be changed due to blind holes, our patented Velocity Washer™ removes the threat of galling from all your torqued flanges. A revolutionary product developed by our own Engineered Products division, the Velocity Washer is placed on the stud like a regular washer, and the nut is torqued as usual. During breakout, the Velocity Washer is activated first, as shown here, and the nut is removed under zero load, once again eliminating the conditions necessary for galling to occur. 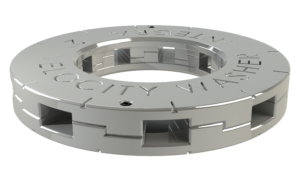 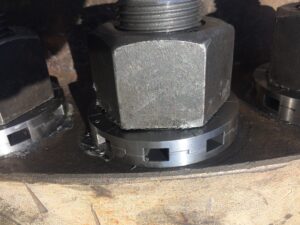 Whichever approach best suits your unique needs, find out how INTEGRA can help you complete your turnarounds better, faster, and safer.